Prison to Praise by Merlin Carothers

Prison to Praise chronicles Merlin Carothers' spiritual journey from a hostile, bitter young soldier in World War II to accepting Christ and returning to the military as a chaplain. Prison to Praise is an enlightening book that is not about a prison with bars, but about a prison of circumstances - and how to be set free! Many people who have read this book have come to enjoy a happiness they never expected to experience. Christians have been overwhelmed to learn that they can live in peace as they discover the secrets of a life of praise. Millions say it has changed their lives and introduced them to the solution to their problems. 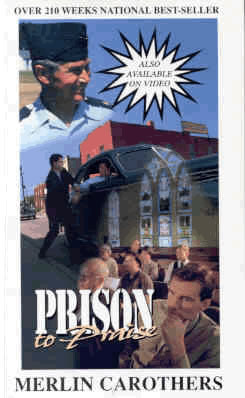 There was the touch of cold metal against my left wrist and the harsh voice in my ear: "This is the FBI. You are under arrest." I'd been relaxing in the back seat of the car with my left arm hanging out the window. The car was stolen and I was AWOL from the Army. Being AWOL didn't bother me. It was the getting caught that hurt my pride. I'd always considered myself capable of doing my own thing and getting away with it. Now I had to suffer the humiliation of the jail cell, stand in line for lousy cold chow, go back to the lonely cell and the hard bunk with nothing to do but stare at the wall. How could I have been stupid enough to get into a mess like this?

I'd been a pretty independent fellow from the time I was twelve. That's when my father died suddenly, leaving my mother alone with three boys to raise. My brothers were seven and one, and Mother started taking in washings and went on relief to keep us alive. She always talked about Dad being in heaven and how God would take care of us, but with the intensity of a twelve-year-old I turned in fury against a God who could treat us that way. I delivered papers after school until long after dark each night, determined to make my way in life. I was going to make the most of it. Somehow I felt I had it coming. I had a right to grab for all I could get. When Mother remarried, I went to live with some of Dad's old friends.

I went to high school, but never quit working. After school, and all summer I worked. As a food packer, shipping clerk, linotype operator, and one summer as a lumberjack in Pennsylvania. I started college, but ran out of money and had to go to work. This time I got a job with B&W Steel as a steel chipper and grinder. Not a very pleasant job, but it kept me in top physical condition. Part of staying ahead in the rat race of the world was being in top shape physically, and I didn't intend to lose out on any count. I never did want to join the Army. I wanted to go off to sea with the Merchant Marines. I couldn't think of a more glamorous way to get into action in World War II. To join the Merchant Marines I had to get reclassified 1-A with the draft board that had given me a deferment to go to college. Before I could make it back to the Merchant Marines, the Army inducted me. They told me I could volunteer for the Navy, which I did, but a freak incident kept me out. I failed the eye test simply because I'd been reading the wrong line on the chart by mistake! So there, against all my efforts, I landed in basic training at Ft. McClellan, Alabama. I was bored to death.

The training was a breeze, and looking for excitement, I volunteered for airborne training at Fort Benning, Georgia. A rebel at heart, my biggest problem always was in getting along with my superiors. Somehow they picked on me in spite of all my efforts to remain in the background. Once, during physical training in a sawdust pit, I spat on the ground without thinking. The Sergeant saw me, and descended like a storm cloud. "Pick that up in your mouth and carry it out of the area!" he screamed. You've got to be kidding, I thought, but his red glowering face indicated he was not. So, humiliated and seething with resentment carefully hidden, I picked up the spit - and a mouthful of sawdust - and carried it "out of the area." The compensation came when we got our first chance to jump from an airplane in flight. This was living! The kind of excitement I was hungering for. Over the roar of the plane engines came the shouted command:

The blast of air makes you feel like a leaf in a gale - and then, as the rope attached to your parachute reaches its end, a bone-jarring jolt. You feel like you've been hit by a ten-ton truck. Then, as your brain clears, you're in a beautiful silent world; billowing above is the parachute - a giant white arc of silk. I was a paratrooper, and earned the honor of wearing the glistening jump boots.

A short book with a powerful message that changed my life when I first read it 40 years ago and still has an impact now. One of those rare books that once you read it, has the ability to immediately change the way you see things so powerfully that it sticks with you for the rest of your life. Amazing. 10/10
Chris W."Prison to Praise" Goodreads review